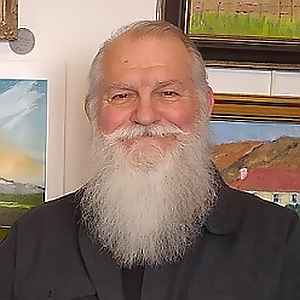 “Painting came late in life for me,” says Cris Cannon.

“I dabbled with water colors as a kid, had art in school, and even tried a bit of oils about 25 years ago but it all fell to the side competing with the work of life.”

After being discharged from the Air Force in 1982, Cris built on his Community College of the Air Force credits and continued with various colleges as he relocated around the country. A native of Birmingham, Alabama, he found himself in Dayton, Ohio after his Air Force tour of duty. Here he started what would become a 30 year career in law enforcement beginning with the Dayton Police Department.

At the close of the 1980s Cris returned to his home and worked for the Ashville Police Department for several years. At the end of his police career Cris became a self-employed licensed private investigator.

In the mid-1990s Cris returned to Dayton to take a position with the Sinclair College Campus Police Department. Writing departmental policy and procedure chapters and supervising the 3rd Relief Cris began taking up recreational writing and oil painting. The duties of a police supervisor and instructor would cause these outside interests to fall to the side.

In recent years Cris’ wife, Linda, passed away from cancer and he has experienced his own health scare about a year ago. This in combination with the COVID pandemic situation he decided to retire all together.

During the last two years he has finished his second novel (written under a pseudonym), has a short story scheduled to be published in an anthology of crime fiction written by former or current law enforcement officers, and has taken up oil painting again. These major recent changes have afforded Cris the time to pursue these interests full time now.
__