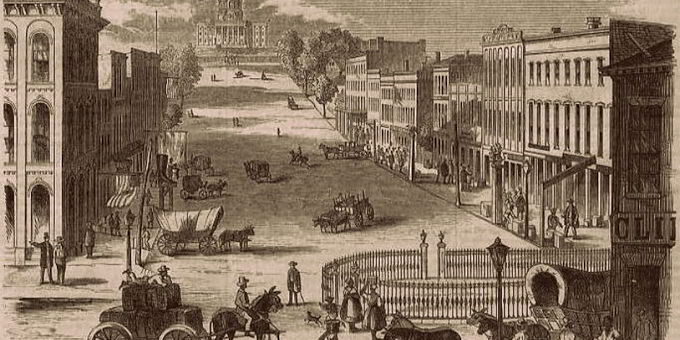 The City of Montgomery; view to the Capitol from Court Square – Engraving from the November 7, 1857 Ballou’s Pictorial Drawing Room Companion.

A Vision for Montgomery

As we enter into the New Year (2015), it seems to be an appropriate time to reflect and ponder on the future of historic preservation in the City of Montgomery.

Much has been accomplished in the past several years and our Fair City is on a very positive trajectory in terms of preserving our “canonical’ downtown historic building stock.

True, there have been very sad losses over time, but this has been true all along in not only the history of our city, but also of so many other cities worldwide.

Consider the architecture of the Campidoglio and the Basilican Church of St. Peter, both in Rome.

Did you know that before Michelangelo was retained to renovate the Campidoglio, those sets of medieval brick buildings were deteriorating on unattractive mounds of earth? Also, the old Basilican Church of St. Peter was a large edifice of good design and aesthetics, but deemed to be in need of total replacement, meaning, of course, demolition.

In America, our very own Independence Hall in Philadelphia (which was not-so-good-looking at the first) has undergone transformations over time to achieve its present look, and the very same applies to our nation’s Capitol in Washington.

Today, the symbol of our nation – the grand dome, designed by Thomas Ustick Walter, has completely supplanted the original dome(s) designed by Benjamin Henry Latrobe and Charles Bullfinch.

To bring the discussion closer to home, the fabulous Late Empire-styled Moses Building was built on the corner of Commerce Street at Court Square, only to make way after a relatively short period of time, for the building now known as the Renasant Bank Building.

Could there have been disagreement and derision about any and all of these architectural transformations?

Certainly, and historical accounts are the voice of such.

Even in the mid-20th century, howls and objections were hurled in the direction of John Russell Pope’s Jefferson Memorial against both architect and the design, which was cited as being aesthetically competitive with the Lincoln Memorial, and for also causing the removal of Japanese flowering cherry trees from the building’s site on the Mall.

The account of Pope’s trials and tribulations is not isolated, but is echoed over and over throughout the annals of architectural history.

What do we make of all this and how do we proceed forward with respect to our own city’s future, particularly with the important focus to carry out past into the future for the next generation and beyond?

My long-held personal belief has been that if the City of Montgomery could have retained 80% of its historic downtown and residential environs from the late 19th century, our city could have been a “Genius Loci” rival with Savannah, Charleston and Eureka Springs, Arkansas, especially with the amenity of being a ‘river town’.

Of course this did not happen, but we still have a significant downtown historic district along with largely intact historic neighborhoods. These are the priorities, simply stated.

Focusing on preserving our historic downtown and the surrounding historic neighborhoods is so critical.

This is not to say it is not happening or that progress has not been made. Great progress has been made; it is so important, though, to set goals that so highly value each and every part of our city’s historic districts and urban fabric, despite ‘appearances’, which is often arbiter for a structure’s initial assessment for ‘standing or falling’.

Also, pursuing the ‘Reconstruction of Historic Properties’ is a valid option endorsed by the Secretary of the Interior.

It would be interesting to see if our city could resurrect some by-gone historic buildings to add back into our historic districts, even if the impressions of the architecture were in exterior appearances alone.

Many historic buildings have been brought back through Reconstruction. Thomas Jefferson’s Rotunda at the University of Virginia was all but a charred masonry shell after a catastrophic fire reduced it to such, until it was rebuilt with architectural oversight by the New York firm of McKim, Mead and White.

Historic Hargis Hall at Auburn University is another similar example of being faithfully recreated and brought back from the dead … from the terrible effects of a catastrophic fire in the late 1970’s.

Would the University of Virginia and Auburn University be the same campuses without their original and very prominent campus buildings? And aren’t we glad that wisdom prevailed in both circumstances?

In conclusion, there has been a longstanding ‘paradigm’ or ‘mantra’ that says that once a historic building is gone, it’s gone forever.

There is much truth in that assertion, yet it is still very possible to enjoy a faithful recreation, or reconstruction, of a historic building for posterity. On a very personal level, if one’s own much-beloved house was destroyed, is it out of the question to build it back just as it was before? If the answer to that question is ‘yes’, then why can’t we do the very same without beloved historic buildings that we enjoyed once upon a time?

Therefore, we may say with utmost confidence that a historic building’s life is not over, if it no longer stands, or if only ‘one brick of it remains’.

While there is the desire to recreate and preserve the grand structures of yesterday for today, we may most assuredly agree with Alexander Pope – “Hope springs eternal”.

Old buildings can be brought back to life for us to enjoy today along with those which remain.

Thomas Kaufmann teaches design studio, architectural history and historic preservation at the Robert R. Taylor School of Architecture and Construction Science at Tuskegee University and was formerly the Designer of the Alabama Main Street Program at the Alabama Historical Commission.

He is happily married to the former Ann Marie Maverick and they have one son, Tommy. Tom may be contacted at ArtistHistorian@gmail.com